A pickled (with salt) fish pâté usually served with crackers as an appetizer in Jamaican cuisine. It is made with smoked red herring (although other fish such as mackerel and shad are also sometimes used and is minced and spiced with chili peppers and seasonings. The dish appears on the menus of Jamaican restaurants and resorts. It is also sold as a packaged food for export. The term may come from the British word salmagundi, used to refer to a salad of many different ingredients. The term is originally from the French word salmigondis, which refers to a disparate assembly of things, ideas or people, forming an incoherent whole (a hodgepodge).

A goat soup in Jamaican cuisine. It is believed to be an aphrodisiac and is made from various goat parts, sometimes including the head, brains and heart. The soup has been sold packaged since 2006 when it competed for Best New Food Idea in a competition covered by the Jamaica Observer. The Spicy Hill Farms company is behind the product, an offering of “Jamaica’s favourite party soup”. The meal has been part of “Maroon” celebrations for 300 years. The pieces of goat are seasoned with local herbs and spices, and cooked along with vegetables and ‘food’ – yam, potato, bananas and dumplings.” Feedback indicated it was going to be as popular as Tastee patties. The Observer reported that Mannish water is still popular at ‘dead yard’ functions, large stage shows and parties (to make sure one can drive home after a few drinks). The food company’s factory is in the hills bordering Manchester, Jamaica and Trelawny. According to Rough Guide, mannish water is traditionally served to a groom on his wedding night. It is also discussed as a cultural feature in books about Jamaica. 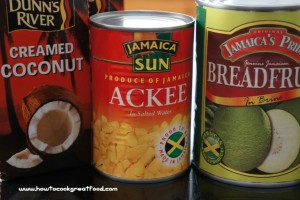 Also known as achee, akee apple or akee (Blighia sapida) is a member of the Sapindaceae (soapberry family), native to tropical West Africa in Cameroon, Gabon, São Tomé and Príncipe, Benin, Burkina Faso, Côte d’Ivoire, Ghana, Guinea, Guinea-Bissau, Mali, Nigeria, Senegal, Sierra Leone and Togo. It is related to the lychee and the longan, and is an evergreen tree that grows about 10 metres tall, with a short trunk and a dense crown. The leaves are pinnate, leathery, compound, 15–30 centimetres long, with 6–10 elliptical obovate-oblong leaflets. Each leaflet is 8–12 centimetres long and 5–8 centimetres broad.

The flowers are unisexual and fragrant. They have five petals, are greenish-white[3] and bloom during warm months. The fruit is pear-shaped. When it ripens, it turns from green to a bright red to yellow-orange, and splits open to reveal three large, shiny black seeds, surrounded by soft, creamy or spongy, white to yellow flesh—arilli. The fruit typically weighs 100–200 grams.

Chayote. Edible pear shaped green vegetable of the squash family. The vegetable bears on vines and comes in smooth skinned and prickly skinned varieties. It is typically eaten boiled or in soups.

A round flat bread made from grated cassava which has been repeatedly pressed to remove the juice. For meal preparation, slices are typically soaked in coconut milk and then fried. It is popularly served with fried fish.

Small unleavened, or lightly leavened sweet cakes that are sometimes flavoured with banana or ginger. They are typically eaten as with cheese or pear as snacks or lunch.

A light sandwich shaped bread. It is typically filled with meat or cheese or a patty and consumed as a lunch or snack item.

Cornmeal Porridge  – A breakfast porridge made with cornmeal as a primary ingredient. It may also include milk, coconut milk, sugar, and spices like nutmeg, cinnamon and vanilla.

A small green, bitter tasting berry. It is sometimes eaten alone after boiling or cooked with saltfish